“There may be times when we are powerless to prevent injustice, but there must never be a time when we fail to protest.”
~Elie Wiesel

On this day of commemoration here are a few relative books:

These are two wonderful gifts I received

“The Holocaust Museum In Washington”
This book was written by Jeshajahu Weinberg, the founding director of the museum. There are hundreds of color and black-and-white photographs throughout the book–photos of kitchen utensils, hair, shoes, forged documents, artificial limbs, and luggage and prayer shawls confiscated from the victims.
Haunting and terrifying are photos showing charred corpses of concentration camp inmates, a starved prisoner in Buchenwald,
a young Jewish partisan woman being hanged in Minsk in 1941, Danish Jews escaping to Sweden on a small boat, and Hungarian Jews arriving in Auschwitz in 1944. The book provides a well-rounded history of  the Holocaust, but I would still really love to visit this museum in person! 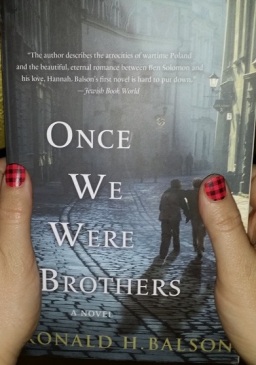 “Once We Were Brothers”
a fictional novel by Ronald H. Balson (a Chicago attorney.) His travels to Warsaw and southern Poland in connection with a complex telecommunications case, inspired this book. It is a story about two boys and a family who struggle to survive in war-torn Poland. I have not read it yet, but I have a feeling I will really enjoy it!

Here are a couple books on my wishlist and tbr list:

From A Name to A Number:
A Holocaust Survivor’s Autobiography
A deeply personal story about one man’s lovely childhood that turned into a nightmare at the age of 15. He survives 5 camps and a multitude of atrocities. He is one of few survivors, and resides in my hometown of Portland, OR. I plan to read this book soon, I am fascinated by the prospect of it.

Book Bean: Jewish Traditional Apple Tea
In a saucepan, bring a cup of water and allspice (4whole) just to a boil; add 2 black-tea bags. Remove from the heat; cover and steep for 3 minutes. Discard allspice and tea bags. Stir in a cup of apple juice and honey to taste.

The Boy on the Wooden Box:
How the Impossible Became Possible . . . on Schindler’s List
This, the only memoir published by a former Schindler’s list child, perfectly captures the innocence of a small boy who goes through the unthinkable. My watching the movie Schindler’s list is one of a series of events that sparked my intrigue and constant curiosity about the Holocaust. I am looking forward to this book.

Book Bean: Turkish coffee
A method of preparing coffee using finely powdered roast coffee beans and roasting them in a small pot. Add in a little Cardamon spice for a nice aroma and taste. It is also known as “Jewish coffee” or “Israeli Turkish coffee” or “Arabic coffee”

Fun Fact: It’s a tradition in Israel to bring coffee to a friend’s house for Shabbat or send coffee in a gift basket for a birthday. Coffee is also an excellent addition to a Mishloach Manot basket for the Jewish holiday of Purim.

What related book have you read, that really moved/impact you?