“She Flies With Her Own Wings”

I love living in Oregon, I cannot imagine living anywhere else.

So I thought I’d put together a list of Oregon books. Whether by a local author or set locally, these Oregon rooted reads are sure to entertain, amuse, and/or inspire readers of all varieties. Just like the state itself. I’ve also included a few special Book*Beans that are specifically found at local shops. So please, enjoy the weird and wonderful world I live in.

Chuck Palahniuk provides answers to all these questions and more as he takes you through the streets, sewers, and local haunts of Portland, Oregon. According to Katherine Dunn, author of the cult classic Geek Love, Portland is the home of America’s “fugitives and refugees.” Get to know these folks, the “most cracked of the crackpots,” as Palahniuk calls them, and come along with him on an adventure through the parts of Portland you might not otherwise believe actually exist.

Palahniuk is also the genius behind “Fight Club.”

but the Café De Olla won.
Its distinct flavor is provided by the ingredients of rich mountain grown Mexican coffee beans that have been ground and Italian roasted, added cinnamon and piloncillo or brown sugar. Cold bottled version coming soon!!

From award-winning author Megan Chance, Bone River is a haunting tale of passion and identity. This beautifully written, lyrical literary novel engages with the themes of the despoliation of the Pacific Northwest’s native culture, and 19th-century concerns about race, degeneration and miscegenation.

Book Bean: Orange Mocha
@ Rimsky-Korsakoffee House
A decadent real chocolate mocha made with orange infused sugar. It is delicious!
Rimsky is a Portland must visit:

An eerie, quirky, strange, and unique ambiance fills this old pdx style house turned cafe, and it is an experience you will not forget. You’ll wish you hadn’t gone to the bathroom alone (inside joke, sorry you’ll just have to visit to understand 🙂

In the tradition of The Lost City of Z and Skeletons in the Zahara, Astoria is the thrilling, true-adventure tale of the 1810 Astor Expedition, an epic, now forgotten, three-year journey to forge an American empire on the Pacific Coast. Peter Stark offers a harrowing saga in which a band of explorers battled nature, starvation, and madness to establish the first American settlement in the Pacific Northwest and opened up what would become the Oregon trail, permanently altering the nation’s landscape and its global standing.

@ Random Order Coffee
Fresh and delicious, a great treat for spring and summer!

In 1911 two wealthy British heiresses, Claire and Dora Williamson, came to a sanatorium in the forests of the Pacific Northwest to undergo the revolutionary “fasting treatment” of Dr. Linda Burfield Hazzard. It was supposed to be a holiday for the two sisters. But within a month of arriving at what the locals called Starvation Heights, the women were emaciated shadows of their former selves, waiting for death.

Book Bean: Shot In The Dark
@ The Dragonfly Coffee House
Double shot of espresso added to Drip. Great for a pick-me-up!

One Flew Over the Cuckoo’s Nest

Boisterous, ribald, and ultimately shattering, Ken Kesey’s novel has left an indelible mark on the literature of our time. Turning conventional notions of sanity and insanity on their heads, the novel tells the unforgettable story of a mental ward and its inhabitants, especially tyrannical Big Nurse Ratched and Randle Patrick McMurphy, the brawling, fun-loving new inmate who resolves to oppose her.

Cascara = coffee cherry, an herbal tea is made from the dried skins of dried berries of the coffee plant. The word originates from the Spanish cáscara, meaning “husk.”

A bitter strike is raging in a small lumber town along the Oregon coast. Bucking the strike out of sheer cussedness are the Stampers: Henry, the fiercely vital and overpowering patriarch; Hank, the son who has spent his life trying to live up to his father; and Viv, who fell in love with Hank’s exuberant machismo but now finds it wearing thin. And then there is Leland, Henry’s bookish younger son, who returns to his family on a mission of vengeance – finding himself fulfilling it in ways he never imagined. Out of the Stamper family’s rivalries/betrayals, Kesey crafts a novel with the mythic impact of Greek tragedy.

Set in a fictional Oregon town in the late 1960s, Cody’s superlative coming-of-age novel is the story of Wade, Lorna and Jesse–teenagers preparing to break out of their small-town lives. Wade is the local sports hero. Jesse is his friend, a mythical athlete and the Indian kid who applies his own rules to sports and life. And Lorna is Wade’s sweetheart who knows there’s no hope in Calamus for a bright, independent girl. The river rushes past the town, linking the three friends with their pasts, their plans and the world beyond.

Book Bean: Karkadeh
Sweet Hibiscus Nectar (best iced)
and The Winey Mocha:
Mocha w/ a hint of wine.
I had to pick 2 for this location, the Winey Mocha is just too unique! 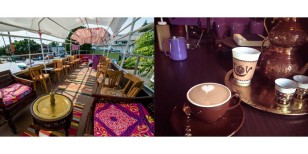 A girl and her father live in Forest Park, the enormous nature preserve in Portland, Oregon. There they inhabit an elaborate cave shelter, bathe in a nearby creek, store perishables at the water’s edge, use a makeshift septic system, tend a garden, even keep a library of sorts. Once a week, they go to the city to buy groceries and otherwise merge with the civilized world. But one small mistake derails their entire existence, ultimately provoking a deeper flight. Inspired by a true story My Abandonment is a riveting journey into life at the margins, and a mesmerizing tale of survival and hope.

In addition to a regular iced Americano or latte, they also offer Gassato, an iced espresso with a little sweetened milk and a float of fizzy water, all made with Stumptown Hairbender.

The Lathe of Heaven

A classic science fiction novel by Ursula K. Le Guin, one of the greatest writers of the genre, set in a future world where one man’s dreams control the fate of humanity.
In a future world racked by violence and environmental catastrophes, George Orr wakes up one day to discover that his dreams have the ability to alter reality. He seeks help from Dr. William Haber, a psychiatrist who immediately grasps the power George wields. Soon George must preserve reality itself as Dr. Haber becomes adept at manipulating George’s dreams for his own purposes.

Sometimes called espresso macchiato, an espresso drink with a small amount of milk, usually foamed. In Italian, macchiato means “stained” or “spotted” so the literal translation of caffè macchiato is “stained coffee”, or coffee with a spot of milk.

Like Dylan Thomas’ Under Milk Wood and Sherwood Anderson’s Winesburg, Ohio, Brian Doyle’s stunning fiction debut brings a town to life through the jumbled lives and braided stories of its people.

In a small fictional town on the Oregon coast there are love affairs and almost-love-affairs, mystery and hilarity, bears and tears, brawls and boats, a garrulous logger and a silent doctor, rain and pain, Irish immigrants and Salish stories, mud and laughter.

I was drawn to this book because of it’s title, which is from my Longfellow favorite, the poem “A Psalm of Life”
Based on the history of a company of real pioneers, this book tells the story of the King family, whose careful plans are challenged by the harsh, unforeseen realities of overland travel. The family makes the unfortunate decision to follow guide Stephen Meek, who leads them into blistering weather, drought, and treacherous river crossings along a shortcut that becomes known as the Terrible Trail.

“I wanted to go to Portland because it’s a really good book town.”
~Patti Smith

What are some of your hometown favorites?